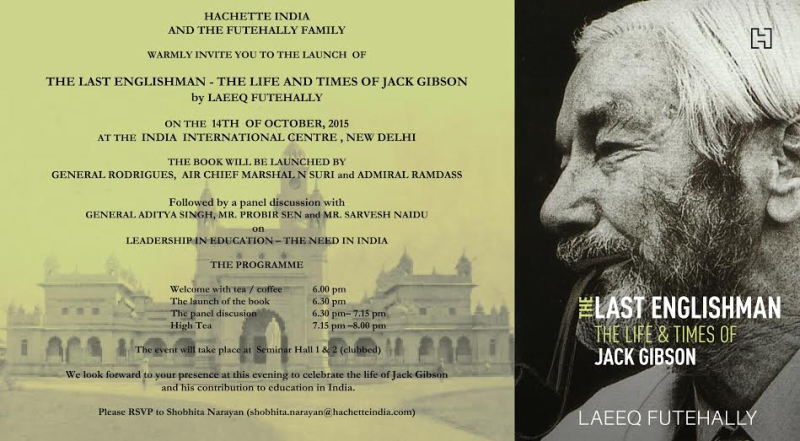 ‘To educate means...to lead out, not to drive in. The first problem for a teacher is...to awake interest in those he is teaching and to make them keen to find out and understand for themselves, rather than rely on textbooks… The ability to do this, indeed, is the test of a really educated man, especially in [India], where objectivity is little valued, and a large assemblage of facts is much admired.’


Widely acknowledged as the pioneer of the public school system in India, Jack Gibson’s name is synonymous with opening the doors of ‘privileged education’ for one and all. As headmaster of Mayo College, Ajmer, he singlehandedly transformed the school into the ‘Eton of India’, laying the foundation for the formidable reputation it enjoys as well as for the methods in which education is imparted in public schools today.

Having moved to India from England in 1936 to join the newly founded Doon School as a housemaster, Gibson adopted the country and its people as his own. His keen mind and larger-than-life nature made him a popular leader, one who was closely involved in his students’ lives, fulfilling the roles of teacher, mentor, parent and disciplinarian all at once. Beloved by his students for his unconventional teaching methods (frequently involving picnics and treks to the nearby hills), his innate sense of fairness and his accessibility, he remained at Doon until 1953 – during which time he also served as the first principal of the Joint Services Wing, now the prestigious National Defence Academy – before joining Mayo College. For his outstanding contribution to education, he was awarded the Padma Shri in 1965.

Educator, visionary, coach, mountaineer, friend and, above all, an inspiration, Gibson left an indelible mark on the institutions and the people he encountered in his life. Drawing on the many memories uncovered in his writings, The Last Englishman recounts the story of an extraordinary man through stories and anecdotes from those closest to him – his boys.